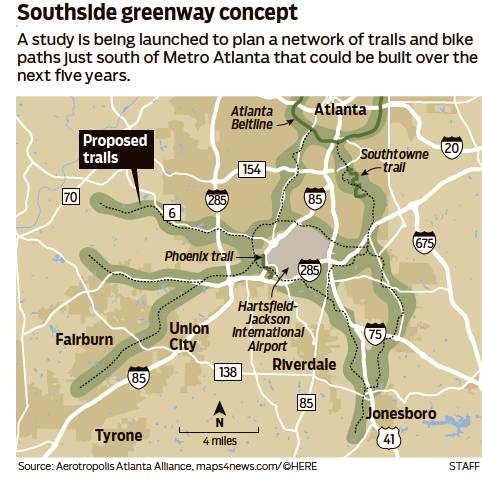 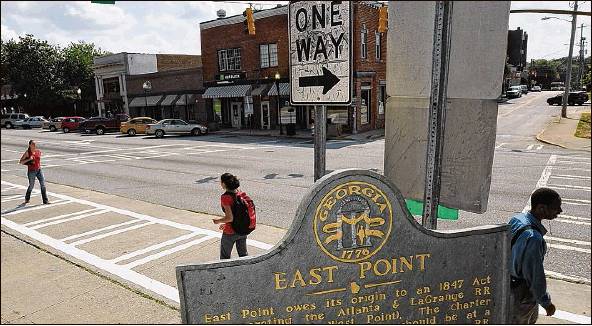 East Point is among the cities that contributed funding for a study to develop a plan for a network of trails around Hartsfield-Jackson International Airport. HYOSUB SHIN / AJC 2009

Could the next Beltline be on Atlanta’s Southside?

That’s the goal of an ambitious greenway concept for the “aerotropolis” area surrounding Hartsfield-Jackson International Airport.

The vision is for a network of trails and bike paths connected across the hodgepodge of cities and counties in south metro Atlanta — and connected to the Atlanta Beltline.

It would create an “airport area beltline that connects all the communities around the airport,” said Gerald McDowell, executive director of the aerotropolis community improvement districts that are commissioning the greenway plan.

The idea is purely conceptual at this point. A $200,000 study aimed at producing a plan for how such a network could be developed over the next five years is being funded by an Atlanta Regional Commission grant and matching funds from Southside governments.

Jean-Pierre Bourget, a community organizer with Organized Clayton who studied city planning at Georgia Tech, said one issue is that Clayton County has never really had a robust network of transit or sidewalks, particularly in areas surrounding Hartsfield-Jackson.

“In the airport area, there is a lack of sidewalks…. And yet there’s a lot of walkers because a lot of people don’t have cars there, and you see the trails on either side [of major roads]. It’s heavily used,” Bourget said. “A lot of individuals that live in that area work at the airport, and a commute that should be painless should not be so painful for individuals who do not have cars.”

Most of the study’s cost will be covered by a $160,000 ARC Livable Centers Initiative grant, which is funded with federal transportation dollars to encourage local jurisdictions “to re-envision their communities as vibrant, walkable places that offer increased mobility options, encourage healthy lifestyles and provide improved access to jobs and services.”

The remaining funding includes $15,000 from the Aerotropolis Atlanta Alliance, a coalition of business and community leaders that helps to attract businesses to the Southside; $7,500 from the aerotropolis community improvement districts; and $2,500 each from the cities of Hapeville, College Park, East Point and Forest Park; Clayton and Fulton counties; and Hartsfield-Jackson International Airport.

The idea for a corridor of trails guided by streams and parkland came from a $220,000 aerotropolis “blueprint” produced last year by the Aerotropolis Atlanta Alliance and the ARC.

“This is kind of like what we’ve been dreaming to see,” said Natalie Martin, chair of the Airport West aerotropolis community improvement district, which voted to hire Sizemore Group, an Atlanta-based architectural planning firm, to conduct the AeroATL Greenway study over the next year.

“The Southside of Atlanta has not gotten enough love,” said Sizemore Group’s Bill de St. Aubin. “The idea would besomebodycouldlivedown there, ride their bike down to the airport to work, or ride their bike to the train.”

The idea of the aerotropolis greenway plan “is not to reinvent the wheel, but build upon plans that cities and counties have already adopted and have a cohesive plan with connections between communities and to other trail networks,” according to Kirsten Mote, program director for the aerotropolis CIDs.

Clayton chief operating officer Detrick Stanford said because the aerotropolis greenway plan will look at how to connect jurisdictions, it is “very complementary with what we’re trying to do in the county.”

The Atlanta Beltline, whose finished portion east of downtown has been hugely popular, is a model for “the entire metro Atlanta region,” Stanford said. “Clearly a lot of communities are looking at greenways as connectors.”

A preliminary concept map shows the Southside network connecting to the Beltline near U.S. 29, as well as to the existing Phoenix and Southtowne trails.

Rob Brawner, executive director of the Atlanta Belt-line Partnership, said the Beltline’s vision is to be “a hub for a regional network of trails — so this is very exciting from that standpoint.”

“People are changing their lives because of the Beltline, biking to work, walking to the store, exercising in parks,” Brawner said. “I think that there’s the opportunity for similar types of quality of life improvements when we build more trails.”

The aerotropolis greenway study will also look at abandoned trolley lines and rail lines and little-used streets to consider for conversion to trails, and will identify potential funding sources and changes to local policies.

But he also said the plan should put an emphasis on safety.

“These folks are not going to be interested in using the trails if they don’t feel safe,” Wilkins said.

Sizemore Group’s de St. Aubin agreed that the main hurdle will be getting community support, “and of course the economy has to cooperate.”

Hartsfield-Jackson spokesman Reese McCranie said the airport supports “any initiative that improves the quality of life for residents who live around the airport.”

“This study is a good step forward to achieve a more walkable, livable community around ATL,” McCranie said.